#155 - RFA Interview:
​Natalie Lane from Perth, Western Australia to Represent the Philippines for Top Model of the World. (June 2017) 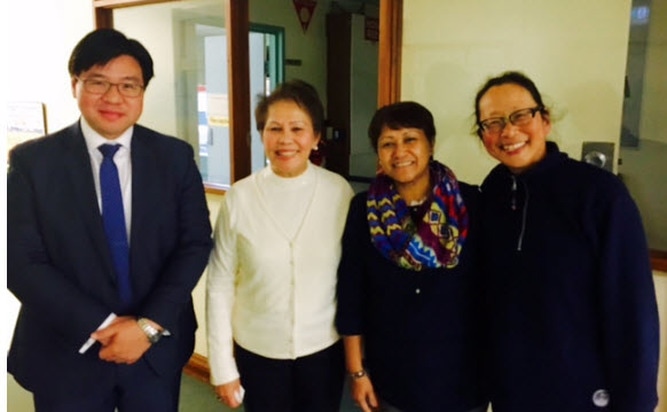 Also mentioned in the interview is the upcoming Fiesta Kultura in Sydney, which is the biggest event on the Philippine-Australian yearly calendar, and one of the biggest multicultural events held anywhere in Australia. 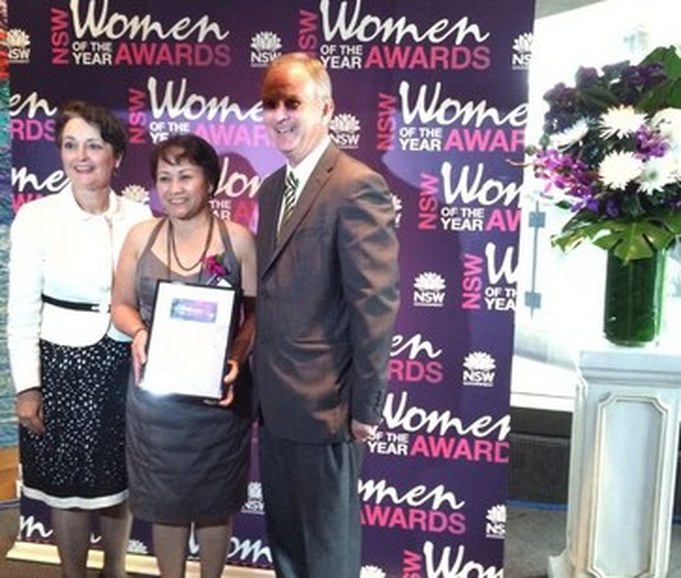 These stockmen and horses are able to deal with a wide variety of environmental conditions from the hot dry summers to the wild frozen blizzards and thick blankets of snow which cover the valleys and mountains during winter.

RFA Interview #152:
Segundo 'Boyet' Vasquez:
The Filipino Guitarist Making Big Waves with his Music on
​the World's Largest Cruise Liners, Brings the Gardens and
Australia's Capital Hill Alive with the Sound of Music.

​Photo above: Boyet onboard a Royal Caribbean Cruise Liner.
Photo below left: Boyet performing in the garden, Canberra, 31st March 2017.
Photo below right: A distinguished audience watches on as Boyet fills the garden and the nearby Capital Hill with the sound of music.
Boyet, as he is more commonly known, works on the largest cruise ship line in the world, The Royal Caribbean Shipping Line, which operates around the world.   Recently an Australian couple on a cruise liked his music so much that they invited him to Canberra.  Boyet was happy to oblige, and entertain various audiences in Canberra.

At the Barber residence before Boyet performed his music magic, Canberra's own rondalla band, the famous Rondanihan led by Ian Bull, delighted the crowd with their classical Filipino ensemble of stringed instruments. With the crowd warmed up by Rondanihan, Boyet took his seat amongst the garden hedges and filled the air with more wonderful sounds. In addition to the garden, the nearby hills also became alive with the sound of Boyet's mesmerising Filipino guitar music. ​ 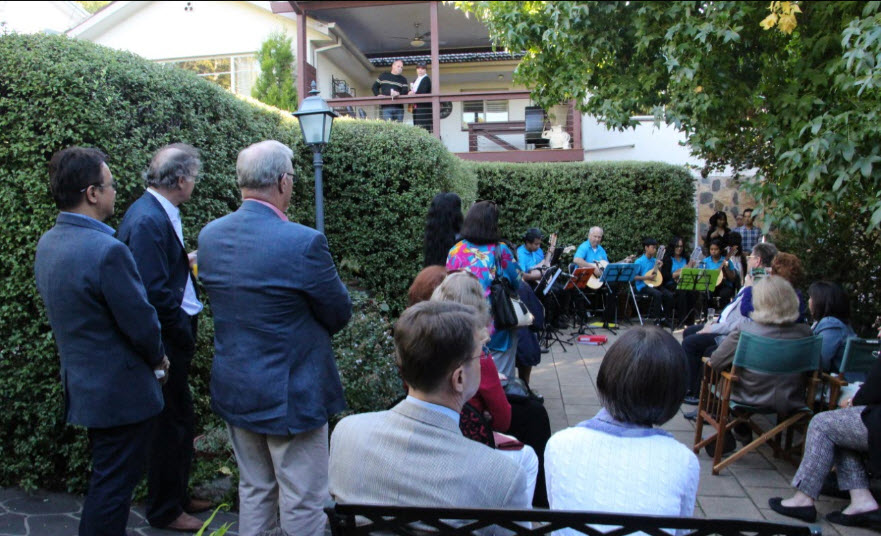 Photo above: The Filipino Rondalla band, Rondanihan performing in the garden.
Photo below: Just one of many of the biggest cruise ships in the world owned by Royal Caribbean International, who Boyet works for as he uses his musical talent to harmonise the world's oceans and seas. 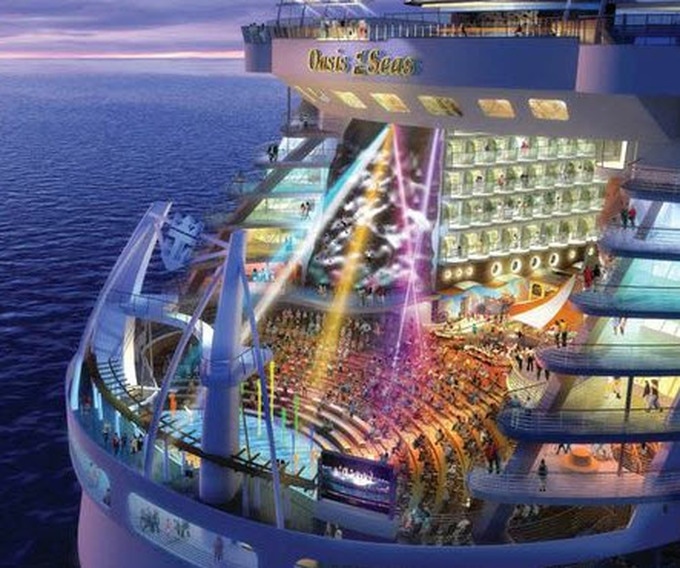 He is the founder of the FEPCOW International Charity, which stands for Feeding and Educating Poor Children of our World.

Captain Weinman, OAM, has helped the Philippines in many ways with the assistance of Filipino-Australians such as Annette Jose, also interviewed below (#150-RFA Interview). Listen to Captain Weinman, OAM, as he talks with a passion about his international charity work.

​ Annette Jose is highly dynamic within the Filipino-Australian community in the Australian Capital Territory (ACT), and as a leader for an international charity in the Philippines which helps poor children.

Listen to Annette as she talks about her noble leadership work for the Philippines through the international charity FEPCOW in her position as Philippine country coordinator.

#149 - RFA Interview: (March 2017)
Rodel Tapaya
One of the Most Recognised and Awarded Painters and
Visual Artists in the Asia Pacific Region.
Internationally Famous Filipino Painter 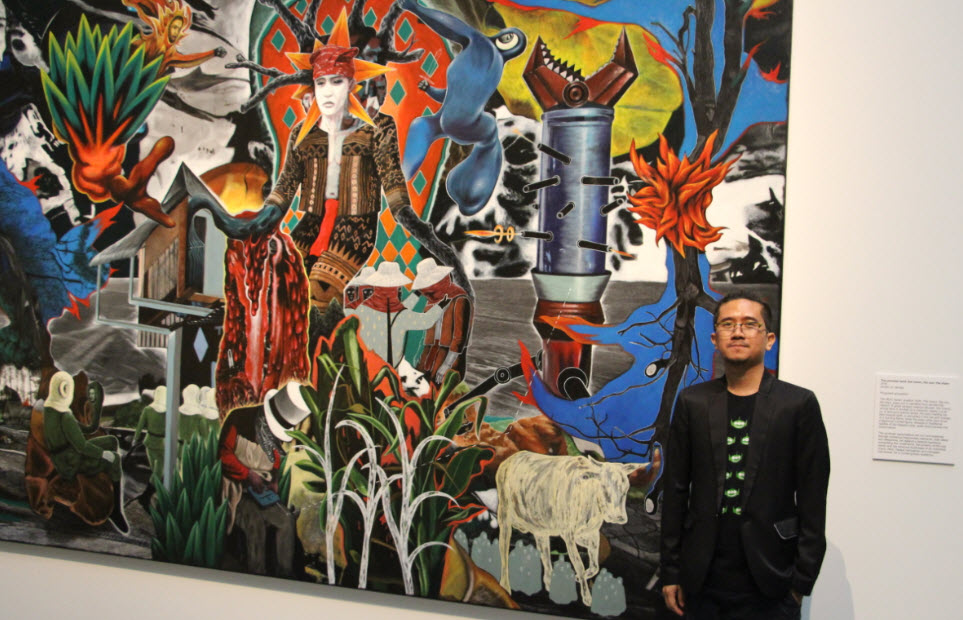 In the huge feature display area of the one of the world's best art galleries, the National Gallery of Australia, in Canberra, Rodel Tapaya from the Philippines drew a large crowd of art enthusiasts and members of the general public on Saturday 17th March 2017.

Mr Tapaya's works have gained renown and critical acclaim by winning in several regional art contests and exposure in international exhibitions. His awards and achievements include: Mr Tapaya's art provocatively brings to life Filipino cultural history as well as contemporary life and issues which are both at the forefront of the Filipino mind and also go to the core of a Filipino's spiritual, cultural and mythical beliefs. His painting are regularly sold out at international art shows around the world.

Some of Mr Tapaya's art work could be turned into feature length movies which could bring Filipino culture, history and contemporary life to the big screen.

Listen to Mr Tapaya as he talks to RFA Director, Gloria Ross, in an interview at the National Gallery of Australia. 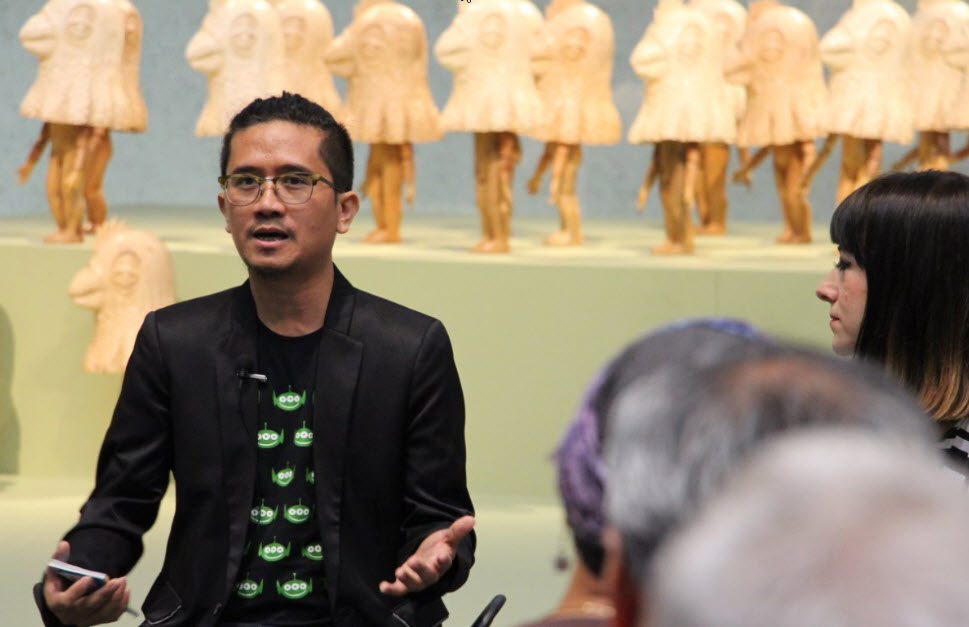 RFA photos above and below taken at the National Gallery of Australia, 17th March 2017.
The photo above of the bird sculptures, titled "Isang Kahig Isang Tuka (One Scratch, One Peck), tell a tale of three greedy, petty and quarreling kings who were turned into birds by their angry god to wander the land aimlessly, scratching at the land and pecking for food.  The sculptures below tell a story of the Manananggals, which is a mythical vampire-like creature. One interpretation of the life of Overseas Filipino Workers (OFW) features in this depiction of modern manananggals.
Radyo Filipino Australia