In addition to Christmas and New Year celebrations, the  30th December every year is a national holiday in the Philippines called Rizal Day.

The Simbang Gabi originated during Spanish rule in the Philippines. It was held in the early hours of the morning for the benefit of Filipino farmers who started their work before sunrise so as to avoid working too much under the hot tropical oriental sun.

The Simbang Gabi became a distinct part of Filipino culture as compared to the rest of the Hispanic world where it was more common to hold evening masses. The last day of the Simbang Gabi, which is Christmas Eve, is called Misa de Gallo (Spanish for"Rooster's Mass"). 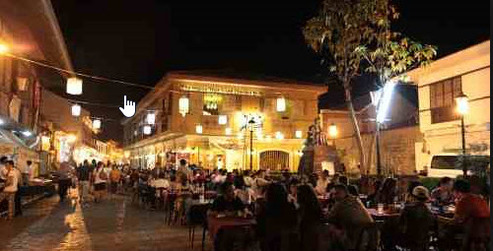 1) Congratulations to the City of Vigan, Philippines for being named as one of the New 7 Wonder Cities of the World.
RFA previously profiled Vigan city, which is the capital city of the province of Ilocos Sur in the northern Philippines. Firstly, thanks to many from the RFA audience for voting for this great city and helping lift its profile.

Vigan was originally called  "Bee Gan", which means beautiful shore.  When the Spanish conquistadors came arrived in the area in 1572, they interchanged the "V" sound for "B" and called the city Vigan.

Vigan is a World Heritage site, due to it being one of the few remaining Hispanic places in the Philippines where its structures remained intact.  Now, as one of the new wonder cities of the world it will attract many more tourists.

If you have never been to this historic city then be sure to visit. Following on from the 'catchy' official Philippine tourist slogan, "It's More Fun in the Philippines", it could also be said "It's More Wondrous in Vigan", particularly after the recent global announcement.

2) Australia's Biggest Filipino Christmas party at the Embassy in Canberra last weekend was a sensational success.
There are many great photos on the RFA website of the sensational Philippine Embassy Christmas Party 2014 within the palatial gated embassy grounds next to Capital Hill. There was hot entertainment, sizzling food, a big crowd and radiant sunshine.

At the event were professional national and international entertainers, a VIP from Sydney who arrived directly from the Philippines the same morning, Australian-Filipino Beauty Queens, an official delegation of the Filipino Community Council of Victoria (FCCVI) from Melbourne, a local  Australian Capital Territory (ACT) politician and party deputy leader, as well as a large crowd from around the ACT and Australia.

Google's 4G (4th Generation) network balloons have already been trialed in New Zealand and will be trialed in remote areas of Australia next month during the 2014 Christmas period.  Two thirds of the world currently has no internet access, and many amongst the remaining one third have low speed and low quality unstable connectivity.  Google's "Project Loon" as it is called, aims to change this and seek global dominance in the provision of a high speed reliable internet service.

2) Listen to interviews of politicians, participants and organisers for the fantastic Fiesta Kultura 2014. Congratulations to this year's stunning Miss Australia-Philippines contestants. Special acknowledgement and congratulations go to the new Miss Philippines-Australia 2014, Glyssa Perez from Sydney (6th from the left) and the Miss Philippines-Australia Charity Queen Hannah Arnold from Canberra (5th from the left) in photo below.

Atty Palacios is a true global Filipino who travels around the world regularly, including to Canberra - which was built similar to the plan of Washington DC. He has a burning passion for seeking justice and helping Filipinos in his mother country to rise out of extreme poverty.  Be sure to listen to this great interview conducted between the two great capitals of Canberra in Australia and Washington DC in the USA.

1) Dr. Erlidia Lee Clark living in Fiji is helping communities and schools in the Philippines through her connections with Mr Nicamil (Nico) Sanchez, the President of the Australian Catholic University (ACU) Postgraduate Association. This is a great story about international connections of Filipinos living abroad who are able to help their fellow
'Kababayans' (Filipino compatriots).
2) A cultural segment on the month of May celebrations of Santakrusan festival across the whole of the Philippines.
3) Upcoming community events in the Australian Capital Territory (ACT) and around the nation continent.

1) Behind the stunning good looks of Dr Curato is a highly articulate, analytical and engaging sociologist with a world class knowledge on her subject matter. She is currently working at the University of Canberra. She is also a favourite academic media personality in the Philippines for her illuminating thoughts about society and political economics. Nicole has established herself as one of the Philippines' most influential social and political intelligentsia.

2) The Filipino-Australian community in Canberra and the surrounding Capital Country region are such a busy and dynamic community. Below is a summary of great and diverse Filipino events which are now on the 'social radar'.