Messages of Support and Seasonal Greetings:
(To and From RFA)

Also, RFA welcomes messages of support from all sides of Australia's multi-party democratic system. During our broadcasts we are also happy to conduct live interviews, or play mp3 formatted prerecorded messages from our local and federal political leaders and representatives who wish to address our large Filipino community in Australia's political capital country region and around the country.

RFA is very humbled in regard to the level of support we have received for our radio service. This demonstrates the great level of good will that exists towards the Filipino Australian Capital Territory community, as well as towards Filipinos all around Australia by notable ACT and Federal Australian politicians.

RFA also receives great support from notable Filipino Australians, community members and friends in Australia, the Philippines and around the world.

The hundreds of thousands of Australians with Filipino heritage and the many others who have regular involvement with the Filipino Australian community are proud to contribute to the social, cultural, economic and democratic fabric of this great nation of Australia and RFA is proud to cover some of their numerous activities! 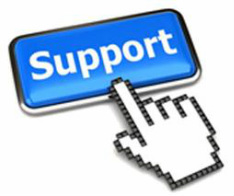 [The RFA photo of the fireworks and flag below was chosen as the main photo for the Manila Bulletin's
around-the-world New Year celebration coverage 2014.] 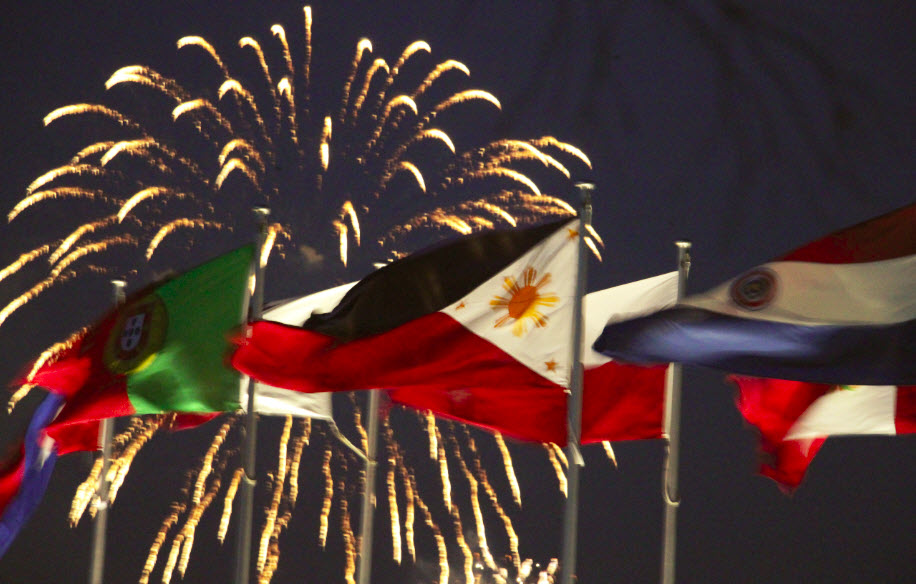 Photos above by RFCA:  Canberra, in all its cosmopolitan splendor, came alive for the 2014 New Year fireworks.

Next to the beautiful sparkling Lake Burley Griffin on the opposite side of the shore to Canberra central business district (CBD) is Canberra's own International Flag Boulevard. This international flag display in Canberra's Parliamentary Zone colourfully acknowledges the international presence in Australia's national capital. Each flag pole has a plaque at its base identifying the nation whose flag is flying from that pole.  The display is arguably the one of the largest in the world and very popular with visitors and locals alike.

The Philippine flag (ang Bandila/Watawat ng Pilipinas), with its distinctive golden sun, is at the centre of the above two photos with the fireworks display and Canberra CBD in the background. 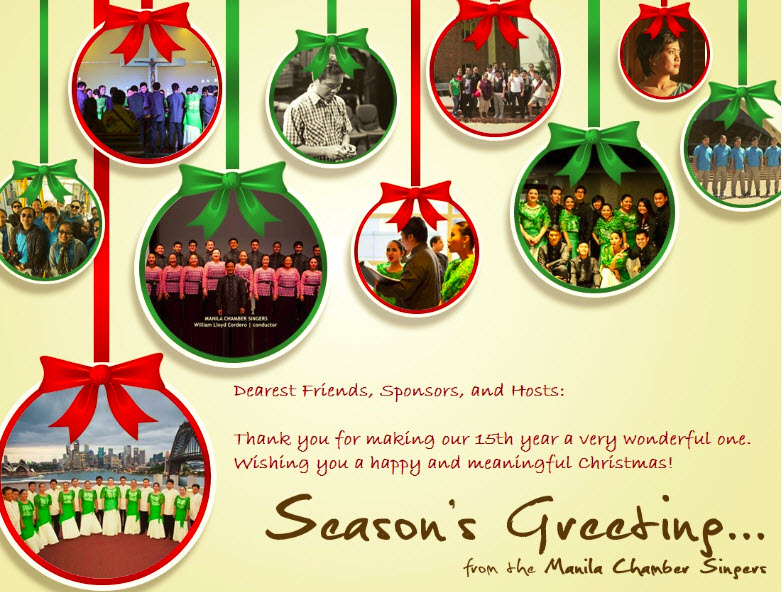 Hello to all our American friends, as well as the other vast multitudes of loyalist Panlasang Pinoy fans around the world.  Since RFCA posted this message about Mr Merano our cyber communication lines have been running 'extra hot'.  Thanks to Vanjo for putting a link to RFCA on his site. See below a message from one of Vanjo's fans here in the 'Land of Oz' who picked up on this story.

Message from the Australian Governor General's Office
to RFCA for the Filipino people regarding the typhoon.

The Governor General is the constitutional head of Australia, with powers to open and dissolve Federal Parliament, issue writs for new national elections, appoint a Prime Minster if the election result produces a 'hung parliament', and is the Constitutional Commander and Chief of Australia's military, taking advice from the Federal Government Defence Minster who has responsibility for operational matters. The Governor General also appoints the Chief of the Defence Force and the Chiefs of the three Armed Services.

Message to RFCA from the
Manager of the Manila Chamber Singers, Ms. Izha Lao,
December 2013

Christmas and Holiday Greetings, 2013,
from the Manila Chamber Singers 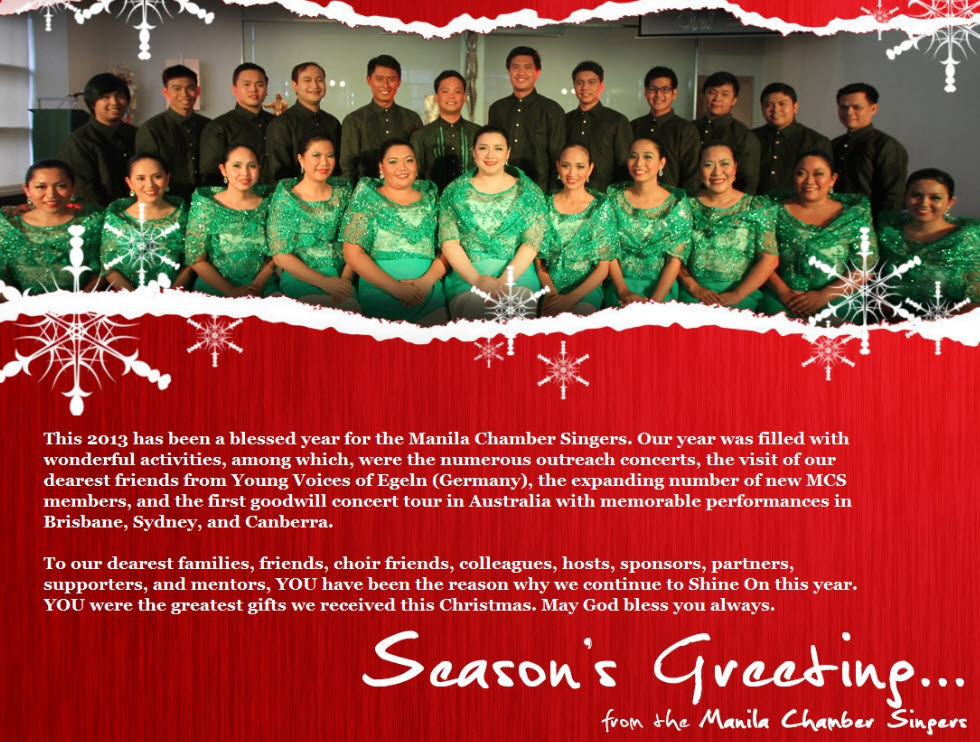 Sent: Wednesday, 25 December 2013
"Dearest Ms. Gloria Ross and RFCA,
On behalf of the Manila Chamber Singers, we send you our sincerest gratitude for making our 2013 a fantastic and memorable one. The Australia Tour was indeed the highlight of our year, and it could not have been possible without you. YOU have been our wonderful gift this Christmas.
Wishing you and your family a Merry Christmas and a wonderful year ahead!
May your holidays be filled with joy and good cheer and the New Year bring you peace and happiness.
With love,
Manila Chamber Singers
CHRISTINE IZHA A. LAO, President, Manila Chamber Singers"

Becky and I have been thinking of you and sent a gift to help victims of Typhoon Haiyan, through our United Methodist Church Relief Fund. We now send our condolences to you.

We would hope that great and significant collective actions of support are multiplied in every country, in sending aid to those so devastated by Haiyan.

May those tragically lost be honoured by the hard work of trained specialists, and common citizens' efforts, as health systems are ultimately restored.

We will remember you and the struggles and needs there in the Philippines, in the weeks and months ahead.

Thank you Senator Humphries for your support.

RFC is also impressed by Senator Humphries' use of the Filipino language. 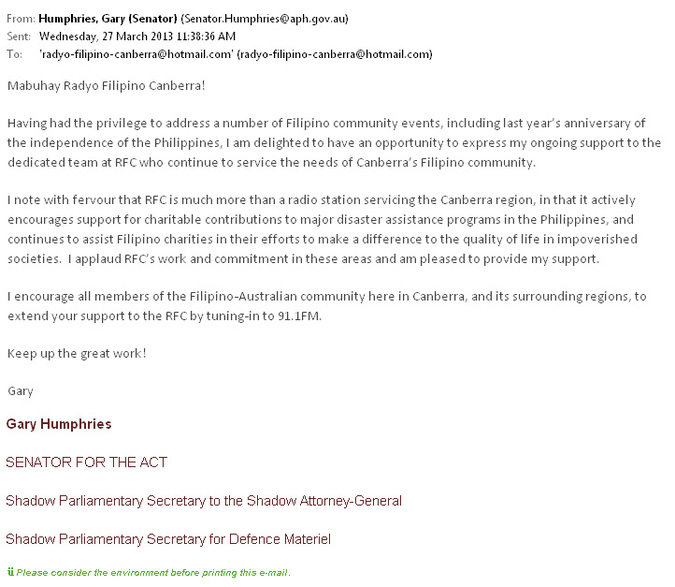 Hon. Andrew Leigh, Member of Parliament (MP), Federal Government of Australia
Labor Member for the Federal Government seat of Fraser, ACT,
Member of the House of Representatives Standing Committee on Economics,
Parliamentary Joint Standing Committee on the National Capital and External Territories,
Speaker's Panel,
Parliamentary Secretary to the Prime Minister (Promoted to this position as a rising Australian political figure of prominence on 25 March 2013) (Congratulations to Dr. Leigh from RFC and the Filipino Canberra Community!).

Dr. Leigh has been in recent communication with RFC. We are hoping to arrange for an interview with Dr. Leigh on our broadcast program.

Dr. Leigh wrote in an email to RFC:
"As someone who spent four years of my childhood growing up in southeast Asia, I know how important it is to stay in touch with news from your home country and expatriate community. Filipino Australians have a long and proud heritage, and I’m delighted that your station helps keep that community spirit alive."

Refer also to separate letter below.

In addition to his position in the Federal Australian Government, Dr. Leigh has a very impressive academic background and has won some notable awards .Prior to entering politics, Dr. Leigh was a professor in the Research School of Economics at the Australian National University (ANU). Dr. Leigh holds an MPA (Master of Public Administration) and PhD from the Kennedy School of Government, Harvard University, Massachusetts, USA. His academic works have been discussed in the major Australian newspapers, as well as the New York Times, Washington Post and Wall Street Journal. In 2011, Dr. Leigh was awarded the Economic Society of Australia's Young Economist Award.  This award, presented once every two years, is given to honour an Australian economist under the age of forty who is deemed to have made a significant contribution to economic thought and knowledge.

Thanks for your support Dr. Leigh and RFC look forward to hearing you on our radio program sometime soon.

Click on the audio below to listen to an interview which RFC conducted with Dr. Leigh. 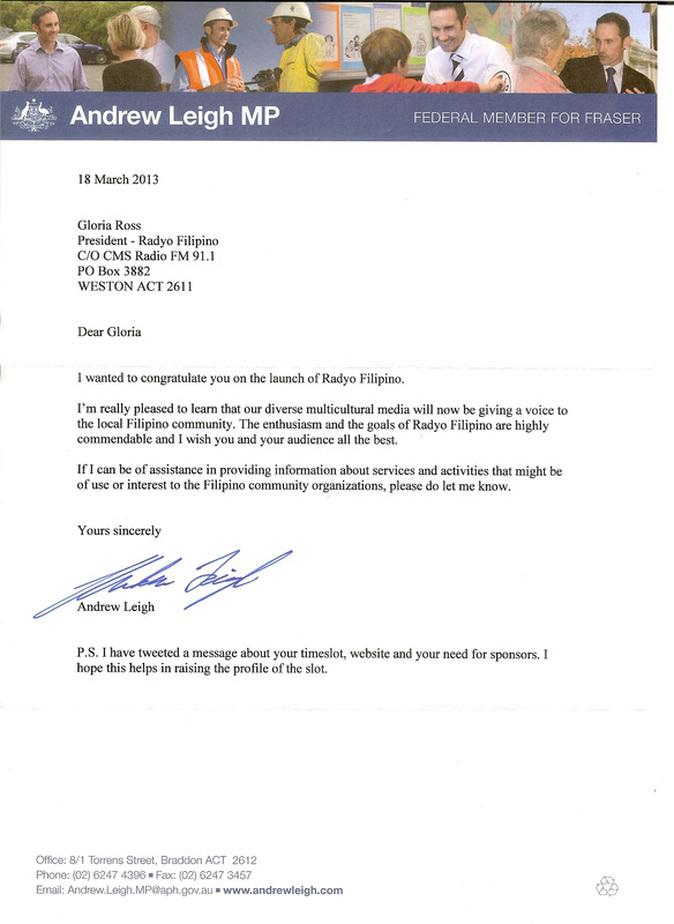 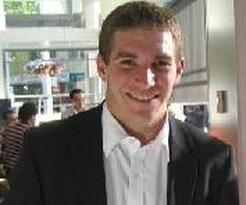 NB: Sorry ladies but as per Mr Coe's email below he will be away soon on honeymoon, so he is now 'off the market' ... Congratulations to Mr Coe and his lucky and lovely wife Mrs Yasmin Coe. RFC and the Canberra Filipino community wish you both a happy life together. Mr and Mrs Coe may wish to listen to the harmonious Filipino serenade about marriage, with Filipino and English subtitles, which is linked at the bottom of our "Canberra Community News" page. 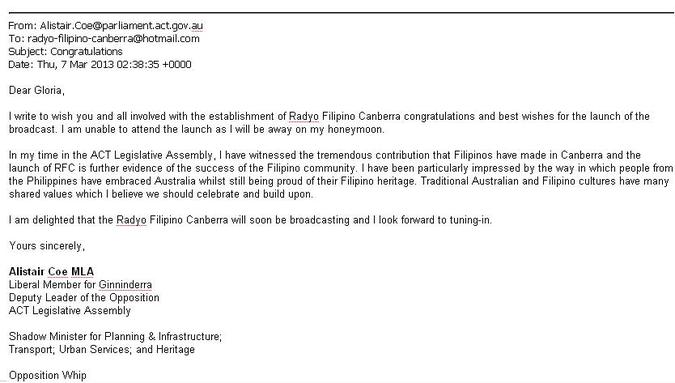