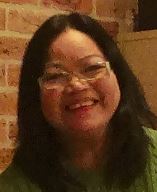 Mrs Carolan completed a Bachelor of Science Degree major in Accounting and Management from the University of Santo Tomas in Manila. Volet then worked at the Australian Embassy in Manila for 10 years. She met my husband Bill Carolan in 1983 when he was posted at the Australian Embassy where Volet was the Senior Accountant.  They got married in 1985 and have 3 sons, James, Matthew and John. From Manila, Volet and Bill moved to Canberra in 1987.  Volet accompanied Bill on overseas postings in Nauru, Ottawa and Athens.

Volet worked in Comsuper in 1992-1995, the Department of Foreign Affairs and Trade in 1995-2001, and the the Department of Immigration and Ethnic Affairs 2001-2004.  Volet is now a Senior Financial Accountant at the Australian Taxation Office where she has been since 2004 to the present.

She has been active in the Filipino Community in Canberra. She has a column called ‘Canberra Corner’ in the Philippine Community Herald newspaper, which has an Australia wide circulation.  She was a recipient of the 2007 Filipino Australian Women Achievers Award from the Philippine Embassy and outstanding Community Leader award from the President of the Filipino Community Council of the ACT in 2007 and 2012. She was a member of the Commission for Women in the Archdiocese of Canberra and Goulburn. She was also active in the Canberra Rosary group- we pray the Rosary in Filipino homes every Saturday afternoon. She loves to cook, working in her garden and loves to sing karaoke. She love traveling in Australia and overseas.

Volet initiated the founding of the Filipino Community Council of the ACT Inc in 1995, after having attended the FILCCA conference in Sydney in 1993.  FCCACT is the umbrella organisation of a number of Filipino organisations in Canberra.

The audio below can also be found on the Previous Interviews page. 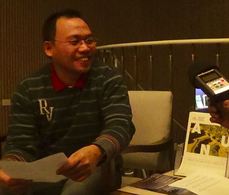 Acram Latiph is a PhD student at Crawford School of Public Policy in the ANU. His research is on provincial growth income in the Philippines with a focus on development challenges in the provinces of the Autonomous Region in Muslim Mindanao.

Acram has studied Economics at San Beda College, Manila and he also completed a course in Finance at the University of the Philippines. He holds a Master of Public Policy from the Syracuse University in New York City under the Fulbright Scholarship.

Acram taught Economics at Mindanao State University. He also worked as an AusAID project manager for different private investments in Mindanao. He is finishing his doctorate degree at the ANU as a recipient of the Australian Leadership Award Scholarship.

Augusto (Toti) Verzosa, 2013
(Please Note: This was originally a Prime Page profile story and the summary of this can now be found on the "Previous Web Stories" page)

Augusto Verzosa, more commonly known as Toti, is a man of many talents. This makes Mr Verzosa one of those rare polymathic individuals who is able to successfully specialise in many areas. A polymath, also referred to as a "Renaissance Man or Woman" within academic circles, is a name which was made famous during the European Renaissance Age of Enlightenment for those exceptionally talented people who contributed to many areas of scientific study and thought.

Toti is an ICT professional with a very impressive background, a past President of the Philippine Australian Association, ACT, an avid writer on international politics, economics and culture affecting Australia and the Asia Pacific region, a singer, composer, guitar and piano player, as well as an all rounded nice family guy. Toti's lively enthusiasm, positive nature and friendly personality endears him to all those he comes into contact with.

Toti has an impressive academic record. Amongst this was his post-graduate study in Electrical Engineering and Computer Science, at the University of Illinois, Chicago, USA, which he completed with high distinction. He also possesses a financial management qualification from the Asian Institute of Management.

Toti has provided many speeches on Australia's role in the Asia Pacific.  He has written articles on this topic which have been read widely within the Australian Filipino community. One such article, published on-line in November 2012 is titled '"THE ASIAN CENTURY: an Australian-Asian Perspective" (click on the title to follow the link)

Dr Vincent Daria from the Philippines is an outstanding achiever on a world class scale. He works at the ANU, which is Australia's premier university. The ANU is also consistently considered amongst the top ranked universities in the world. Some of Dr Daria's areas of expertise are Lasers, Quantum Electronics and Neurosciences. He is currently working on mapping brain functions using lasers and has developed laboratory and scientific instruments for the ANU.

Dr Daria went to school in Toledo City, Cebu. He obtained a Bachelor of Science (BS) in  Applied Physics in the University of the Philippines (UP) Diliman.  He studied under Prof. Caesar Saloma (now Chancellor of UP Diliman), who he considers as one of his inspirational teachers. Dr Daria's awards are impressive. He has a: National Research Council of the Philippines Achievement award in Physics; Third World Academy of Science Award for Young Scientist; National Academy of Science and Technology, Outstanding Young Scientist.  He is also a member of the Philippine-American Academy of Science and Engineering (PAASE).  His current work here in Canberra at the Australian National University (ANU) is at the 'leading edge' of neuroscience achievements in the world.

Dr Daria demonstrates the depth of intellectual talent which the Philippines produces. The Philippines is the 12 largest country in the world measured by total population, with just over 100 million people. The Philippines is producing more intellectual talent every year. The Philippines is a great global citizen because it has so many people of Filipino heritage contributing to the social, economic, political and scientific fabric of this great planet we call "Earth". RFC would like to congratulate Dr Daria on his fantastic achievements. The Canberra Filipino community is glad to have a person of Dr Daria's caliber amongst us. Dr Daria is also one of the distinguished invitees for the launch of the RFC's inaugural broadcast.