LOLO AND LOLA's Restaurant Update:
Is there cross-border rivalry developing to get more of Lolo and Lola? Many groups make the two and a half hour journey from Sydney, (NSW) to eat in the Canberra (ACT) whilst wishing that Lolo and Lola Restaurant would spread around Australia (July 2017) 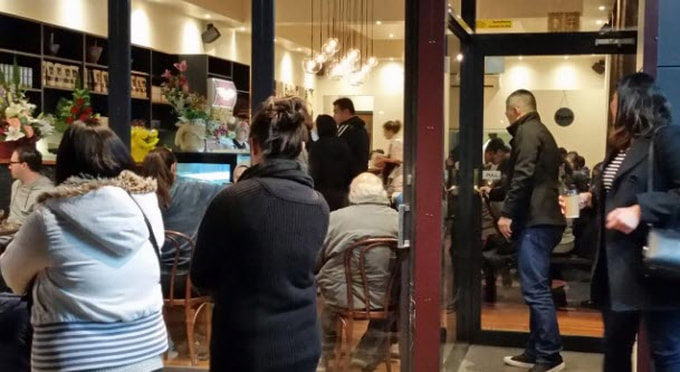 Photos above and below: Day and night, Lolo and Lola's restaurant was full from its pre-midday opening to late at night.

People don't mind the wait to get seated at times, as it has become like a Filipino pilgrimage to eat at the restaurant. This is a restaurant where everyone wants to eat there again and again.  It has a great social atmosphere for both Filipino-Australians and the many other Australian locals who love the food.
It's first public week of opening saw thousands of customers come through its doors.  The queues lasted from before midday until later into the evening - from opening to closing.  Lolo and Lola also have thousands of social media followers. Since the first week the crowds seem to just keep coming all day long.

Jay, Kim and Christina are possibly the most qualified and experienced Filipino chefs in Australia. They did extensive training at some of Manila's best institutions and hotels, as well as around Australia, such as in Sydney, Melbourne (the Grand Hyatt) and Perth. Jay and Kim moved to Canberra with their beautiful daughter, and Christina.

Their long hard struggle to get themselves to this point in time has been like a fairytale journey which they are very passionate about. Their post below demonstrates this journey and passion.
Once upon a time, we had a dream. It was a dream to share the exotic and honest flavours of the Philippines' 7,107 islands to Australia and to the world. The dream felt impossible, and yet we tried. At times it was difficult, but we kept going.

On JULY 13, as LOLO and LOLA opens its doors, this dream -- the dream that once seemed so distant -- will become a beautiful reality. A reality that will embody our vibrant culture, our rich history and our people. A reality that will somewhat make us, as Filipinos, proud. We surely can't tell if we'll live happily ever after. But this reality will - hopefully - make our dearest lolos and lolas happy ❤️
LOLO and LOLA --- opening on JULY 13 at 3 Watson Place, Watson, ACT 💙💛❤️  [Lolo and Lola Facebook Post]

3 Watson Place, Watson,
Starting Thursday 13th July 2017.
Phone: 0412929780
@loloandlolacanberra
The new Lolo and Lola restaurant is well located near the main Northbourne Avenue thoroughfare leading out of Canberra to Sydney and next to a large local supermarket and other shops.

Also nearby in the same suburb is Canberra's largest commercial television and production studios, as well as, within walking distance, the world famous Academy of Interactive Entertainment (AIE) which produces some of Australia's best animation experts for the big screen. Some of these film production experts go on to ply their highly specialised trade for the Fox Studios in Sydney, which are the largest integrated studios of their type in the southern hemisphere, and on to Hollywood in LA. ​ 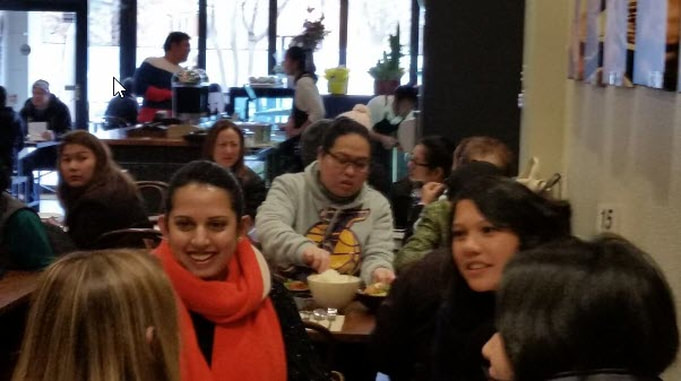 Photo above: Happy customers enjoying the great food, service and atmosphere of Lolo and Lola's Restaurant.
Photo below right: Early photo of the mother who helped Jay and Kim, and who was an inspiration for the business name Lolo and Lola (Grandfather and Grandmother). 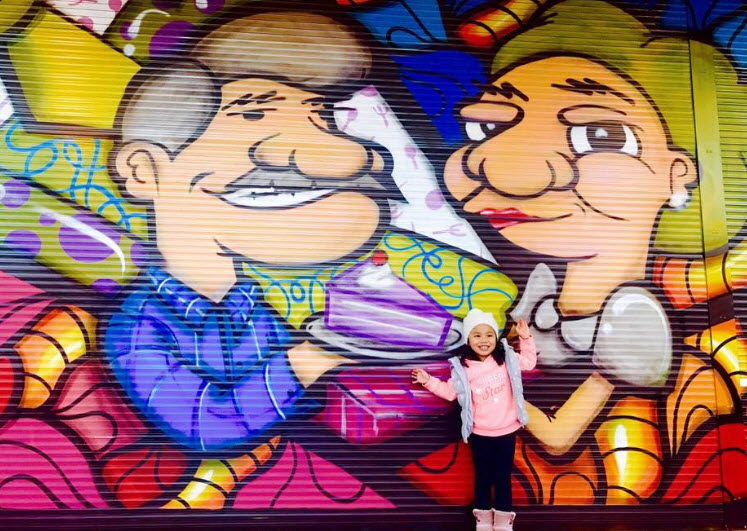 Photo above: Jay and Kim's daughter standing in front of the now iconic mural depicting a Lolo and Lola (Grandfather and Grandmother) with Filipino food, painted on the outside of restaurant of the same name in Watson, ACT.
Radyo Filipino Australia