To Wish Upon a Star Then Make One:
The Unlimited Revolutionary and Evolutionary Power Source - Limitless Clean Green Energy To Change the World Forever
(November 2016)

Photo: Inside a fusion reactor at the Massachusetts Institute of Technology (MIT).

Harnessing fusion power could be described as one of the great life changing revolutionary and evolutionary steps in human history which is now underway in the 21st century. This is not to be confused with fission power, birthed in the mid 20th century, which splits atoms as used in atomic bombs. Instead, fusion, as the name suggests, fuses atoms together.

It only takes two nuclei to 'tango' and fuse to form a heavier nucleus which releases huge amounts of energy. In nature this is the process which births and powers stars throughout the universe, such as our sun.
​To make fusion happen on earth, scientists need to build a machine which can heat atoms to hotter than the core of the sun and then control it without melting the machinery or plasma chamber.  They've already done this.

The trick to stopping any machinery or chamber from melting is to stop the plasma physically touching the sides which can be achieved through magnetic force fields. Meade continues: "The record plasma pressure validates the high-magnetic-field approach as an attractive path to practical fusion energy." 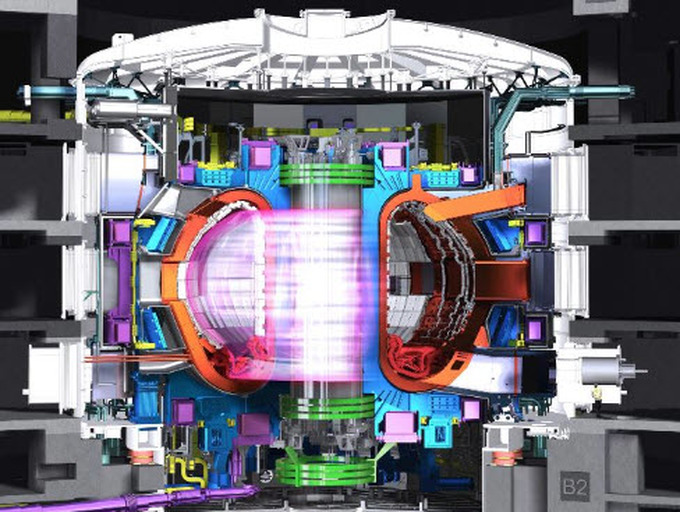 Photo: A cutout image of a fusion reactor.

​By isolating plasma from ordinary matter using a super-strong magnetic field humans can replace all nuclear and fossil fuel power plants at a stroke.

Fusion's fuel is 'heavy hydrogen', plentiful in seawater and a few kilograms could power a small city for a year. Fusion emits no greenhouse gases. Its waste is balloon-ready helium. Stars are created naturally in the universe when massive amounts of hydrogen are sucked in by gravity to a central point.  There are even so-called rivers of hydrogen floating through space which humans can one day map and utilise in their space travels.

Nic Miller wrote in the Sydney Morning Herald on 29th October 2016, about what he regards as the "biggest and most important scientific experiment of the 21st century". He talks about his visit to the International Thermonuclear Experimental Reactor (ITER) in the countryside of southern France. ITER means "The Way" in Latin.

"Smoosh two atoms together hard enough, hot enough, and they fuse into a new element just a little lighter than its predecessors' weight combined. That lost weight is multiplied by the speed of light squared into a massive amount of energy."

The plan is for the plasma to ‘burn’ and therefore self-sustain itself in order to deliver fusion energy to the grid. 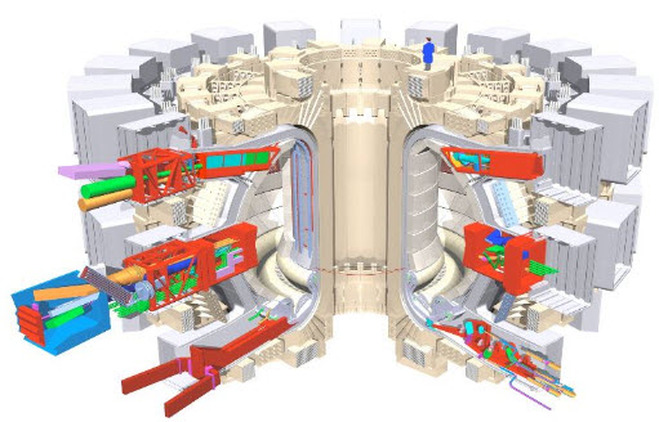 Photo above: A cutout image of the world's largest fusion reactor being built in southern France, called the International Thermonuclear Experimental Reactor (ITER).  This reactor will have millions of components.  There is an image of a person standing on top in a blue coat which demonstrates the scale of the reactor.
Photo below: Inside the ITER plasma chamber where all the super-hot energy action happens. 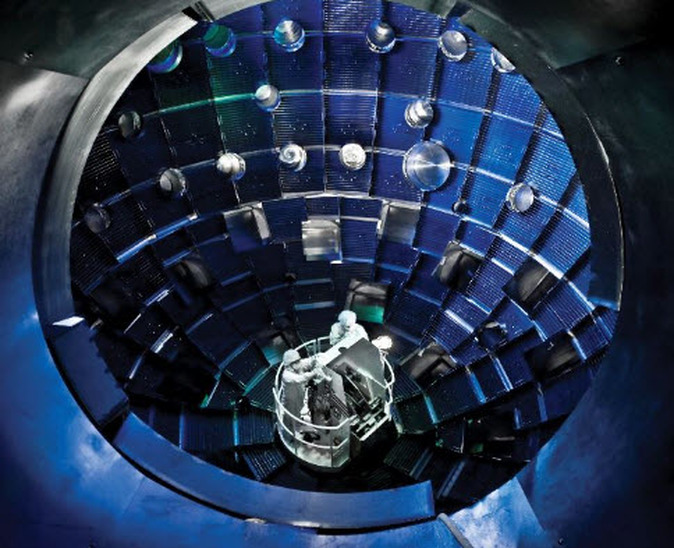 ​ITER recently signed a deal with Australia's Nuclear Science Research Organisation (ANSTO). Australian expertise was so valued that Australia didn't pay for the privilege to be part of the international collaboration as most other countries did.

​Because the plasma in a tokamak can misbehave, it needs to be carefully monitored so it does not flare out or become unstable and touch the sides of the chamber. The Australian team at the Australian National University (ANU) in Canberra are experts in monitoring the flow of plasma in great detail which gave them a free ticket into the ITER club.
Radyo Filipino Australia