Dr Reynaldo Dante G Juanta OAM, Retired Philippine Honorary Consul General in South Australia (SA), Australian Justice of the Peace (JP), Visiting Professor in Philippine Normal University Manila, has recently written two great books. These books provide a great personal history of the life and times of a migrant Filipino to Australia, as well as a more general perspective social, political and economic perspective of Filipino migrants to other countries.  This was recently launched with great fanfare in Adelaide, the capital city of SA. 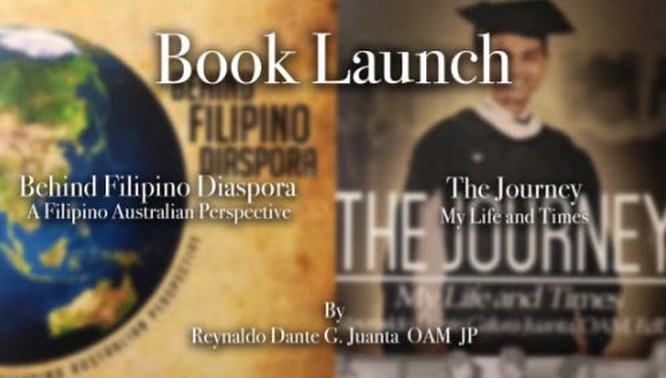 THE JOURNEY My Life and Times: This book traces the author’s life in the Philippines and in South Australia joining forces with other socio-cultural community leaders in championing and advancing the cause of multiculturalism in the State. He started the journey from a precocious child to a determined young teacher with a brilliant mind rising to professorship in Philippine universities to a skilled educator highly valued by the South Australian Education Department to an esteemed community leader and Philippine Consul General making his mark in the rich multicultural landscape of South Australia. The book offers the reader inspiration and insights to draw upon. 314pp $20 (excluding postage)

BEHIND FILIPINO DIASPORA: A Filipino Australian Perspective carefully delves into the intriguing history of the Filipino “Brain Drain”. Beginning with Spanish ruled Philippines and the Ilustrados’ movement by Filipino exiles in Europe to the political landscape of the Philippines today, the author examines the compelling reasons and circumstances that led many Filipinos to seek a life away from their beloved country and the contribution they bring to their adopted home. This insightful body of work serves as a wonderful resource to academics, students and to any one with a keen interest in Philippine culture, society and core values for which the Filipinos are well known. 260pp $20 (excluding postage)
Radyo Filipino Australia