Canberra, the home of one of NASA's only three deep space stations, was privileged last week (first week of May 2018) to be graced by the visit of Charlie Duke, Apollo astronaut and Gerry Griffin, NASA's Mission Control Flight Director for the Apollo missions.

Astronaut Duke's memory of his experience was that it was "incredibly exciting".

He also said: “I’m standing on the moon and it’s real, but it’s like you’re in awe.” 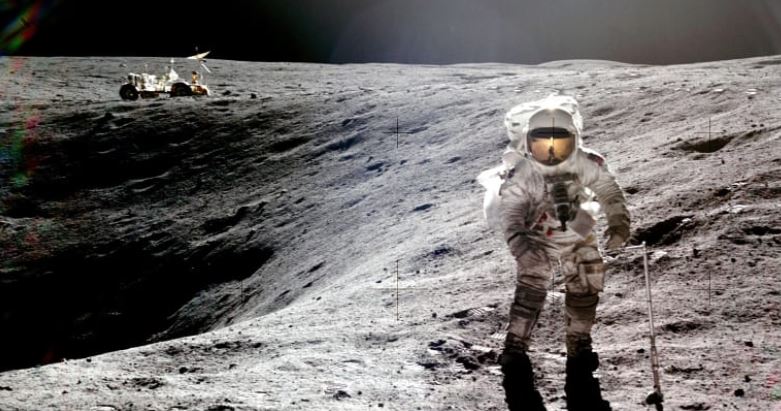 Photo above: Charlie Duke standing on the moon.

In regard to Astronaut Duke's thoughts about Mission control, he continues:

“I saw the young, talented and experienced in Mission Control do an outstanding job. I’ve always said I wouldn’t have landed on the moon if it hadn’t been from the expertise of Mission Control, they’re the unsung heroes.”

The talented technical guru and management genius Gerry Griffin was made flight director at the age of 33.  Mr Griffin held the position of flight director when the now-famous call "Houston, we have a problem” came through from Apollo 13 in 1970, due to a localised explosion in an oxygen tank. Mission control ordered them back to Earth immediately. Mr Griffin also was the technical advisor for the Apollo 13 movie, starring Tom Hanks which became a blockbuster Hollywood movie.

The Canberra Deep Space Centre also played a crucial role in the Apollo missions, including being the first place on Earth to receive the signal from the first man who walked on the moon in 1969, relaying it to the USA for broadcasting live around the world.

Photo above left: Gloria Ross, RFA Director and broadcaster, pictured on the famous Daytona Beach, on the northern edge of Cape Canaveral, after attending a luncheon with former astronauts at the Kennedy Space Centre before the launch of the Endeavour Space Shuttle, which was named after the famous ship commanded by the 18th century British Explorer, Captain James Cook, the first English Captain to land in Australia.
​
Photo above right: Gloria Ross with one of her children in front of NASA's Space Shuttle Hangar, at the Kennedy Space Centre, Cape Canaveral, Florida, USA, with the fueled up and ready for action Endeavour Space Shuttle on the launch pad nearby.
Radyo Filipino Australia